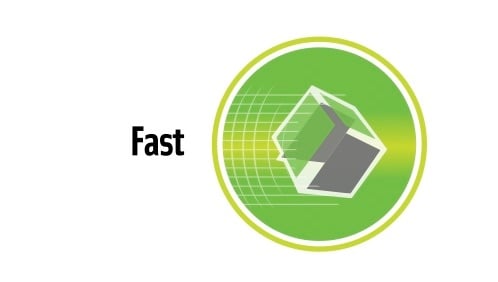 We've arrived at the eighth chapter in our "speed" series of blogs, “Can you? Visage can.” We've got just two more chapters to go, so thank you for your continued interest.

In our last chapter, we discussed how thin-slice reading using Visage 7 enables radiologists to read faster and to provide the best possible patient care. While in recent years thousands of institutions have spent tens of millions of dollars each on the latest thin-slice scanners, their viewers and diagnostic workstations only support reading "thicks" and secondary capture reconstructions created in the hope they are acceptable to the reading radiologist. These legacy viewers don't support thin-slice reading and choke on the data. And by choke, I mean they just won't work.

No one wants to put a speed limiter on a sports car, so why have healthcare institutions put a "care-limiter" on their significant scanner investments? It is because traditional PACS technology has not kept pace, but there is a better way...with Visage.

Only Visage 7 enables institutions to get the greatest value from their scanners, enabling radiologists to read faster, with greater clinical accuracy. If one considers thin-slice reading to be cutting edge for primary interpretation, how about access to prior imaging? Pretty basic, wouldn't you think? Think again.

And that brings us to our next topic in Chapter 8: Priors.

Most legacy PACS have performance limitations that extend to prior exams.

Access to prior imaging is a more widespread issue than is commonly discussed, with priors frequently not available at the time of interpretation. In fact, at SIIM 2017 there was a presentation I observed by one of healthcare's most prominent institutions that discussed how access to priors remains a systemic enterprise challenge. They presented analytics research that "in general, comparison exams used were under 5 days old for the average exam interpretation". On most days, this institution speaks about their innovative thinking and broad vision, but on this morning, they spoke about their radiologists having difficulty accessing priors during interpretation. It was refreshing to hear their challenges openly presented, because we hear about these challenges when we speak with institutions that use a single PACS or multiple PACS, across one location or multiple locations.

Multiple PACS certainly complicates prior availability. This is probably not surprising, but a friend who has worked at numerous high profile institutions shared with me that in his experience radiologists reading in one organizational PACS will not search for prior images in a different organizational PACS, even if they know priors are available, because the effort is too disruptive to their reading workflow. When prior imaging is not readily available, radiologists may seek out prior reports if those are easily accessible, may delay the interpretation until prior images/reports are made available by other support staff, or may dictate the case without comparison.

What is well known is that even if prior images are available, many legacy PACS cannot support the rapid display of current and (all required) prior exams for reading. For example, there is no denying that the display of today's multi-thousand slice CT, compared to multiple recent multi-thousand slice CTs cause challenges for most legacy PACS. It's a widespread problem. And as noted, if performance or availability is an issue, radiologists are relegated to looking at the current exam and referring to prior reports (if available), instead of prior images.

Sometimes even if prior images are available in legacy systems, inadequate relevancy rules get applied and the result is a set of displayed priors that leave the radiologist wanting more. What if prior(s) are known to exist by the radiologist and unavailable for display because they didn’t match the rule? Will the radiologist wait for the prior(s) to be retrieved for review? Possibly depending on the perceived importance of the prior(s), but from what we hear from both hospital and ambulatory based radiologists, waiting is unlikely, which results in a poorer quality report. This is highly disruptive and frustrating for the reading radiologist who knows prior image(s) exist, but can't view them in a timely fashion, and report quality ends up being sacrificed under the weight of unread studies to be reported.

Another pertinent example about legacy PACS performance of priors is related to digital mammography and tomo (MG/DBT). We've been to numerous imaging organizations who struggle under the performance implications of the delivery and display of multiple gigabyte MG/DBT priors. Speaking of limiters, I've met with imaging organizations that have capped the number of supported MG/DBT priors artificially due to performance problems related to display of current/priors, pre-fetch of priors, study routing and all-of-the-above. One of those organizations I met with had a standing rule that limited the maximum number of priors delivered to two priors for every current exam. Two. This is contrary to the practice of breast imagers who expect to be able to view and compare numerous priors (if available) during interpretation. For some organizations, the network impact is so significant, patient scans can only be performed in the morning, and the balance of the day is spent managing the data burden of interpretation and in anticipation of the next day's schedule. Quality is sacrificed. Radiologists are slowed down, interrupted and patient care is negatively impacted.

In stark contrast, Visage 7 has an all priors philosophy.

Quality and speed are never sacrificed with Visage 7, because in addition to Auto Prior rules for current/prior display, all priors are always immediately available for display. The reality is relevancy rules are adequate only up until a radiologist runs into a case where they know a prior is required and available, that didn't match the relevancy rule. Visage is of the opinion that the ultimate arbiter of relevancy is the mind of the reading radiologist, for the specific study being read. Each and every study is different in the context of the given patient, and fundamentally, rules are fallible. Radiologists deserve to have immediate access to all priors, whenever and wherever required, in order to deliver optimal patient care. That is the standard Visage 7 provides, for each and every interpretation.

Stay tuned. Next up for "Can you? Visage can" is Chapter 9: Study Injest Performance.

Concluding a difficult year beset by the global pandemic, RSNA[...]

Imaging AI in Practice | Is It Real Yet?
by Andrei Leontiev on November 19, 2020

There is a strong belief in radiology that Imaging AI is “coming[...]